Results and time for another Tournament

Although the last tournament ended awhile ago i forgot to write up my results
As for the tournament, not so good:

Game one was vs Dark Eladar in a kill points mission, i was winning 3 kill points to none for the first 3 turns. Then i lost some tanks and a few units and wound up losing. i had 3 kill points to his 4. Most interesting part of the game was my commander, he was the only man left and took a charge from the archon who managed to do one wound and i made the invul save, dished out two wounds in return. Next turn archon gets one wound in, i again make my invul save and then kill him. My commander tried to get out of the terrain, but gets charged by 10 warriors who did nothing and my commander kills a few of them. One of my sentinels joins in and just as i pick up the dice and before i could make my rolls in the following turn the game ended. For some reason my guard did really well in assualt, 12 - 10 points, 10 point loss to me.

Game 2 was against Necron army which at 1250pts had a deciever, monolith two units of 3 destroyers, tomb spider and warriors. thing about this game was we didnt know what the the mission was until turn three, which was rolled of and ended up being kill points. By that stage i was down 3 kill points and i hadnt killed anything of his, i managed to kill one unit and at the end of it, it was six kill points to my one. 16 - 8 points, 8 points loss to me.

Game 3 was against chaos, list consisted of Lucious, Daemon Prince, three squads of 8 death guard in rhinos and two obliterators. Mission was minor objectives, setup was quarters and ten objectives were placed in the other corners. One objective was removed each turn by a different player, i just realised this minute that he had placed his objectives in his quarter when you were not supposed to do it, fml. I ended up losing, holding one objective to his three, what consistently happened is when i needed it to go into turn six, a two was rolled for the turn continuation. Could have won the game if it went into turn six, another interesting moment was losing 18 out of 20 guardsmen to three flamers and then returning the favour to that unit, with my demolisher knocking the unit down to one man and lucius to one wound. 13 - 9 points, 9 point loss to me.

Game 4 was against eldar and the mission had one main objective in the middle and two in each of the deployment zones. Well it was a mixed bag, but at the end he held two objectives and i held one, so with a 20 man blob sitting 12 inches away from the one dire avenger on his deployment objective, we roll for turn 6 and the dice come up with a 2. 12 - 10 points, 10 point loss to me.

So i finished somewhere near the bottom, did well in painting and composition markings. But i think next year ill either take my chaos or finally finish my marines.

So with one of my favourite two day tournaments coming up at the end of this month, its time to get cracking. For this one ive decided to go with my Chaos, as you can see from my results with the guard at the last tournament, i have been put off from taking them to tournaments at the moment. So having written up a list,which ill post up soon, i need to put together and paint the two units i now need. Which are a standard unit of Chaos Space Marines and a unit of Khorne Bezerkers.

Here are photos of one of my painted units i have done so far, to show off my Black legion scheme and this unpainted unit, is one of my favourite set of old school chaos models. They will represent a more veteran unit of marines. 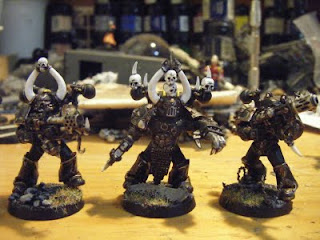 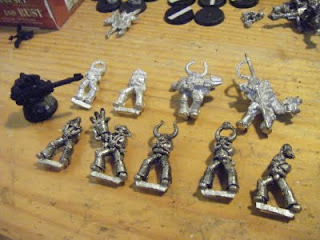