For anyone interested my group of friends are running a long term campaign, which will contain a fair few armies and story lines. Ill be using the might 124th Praetorian, a Marine Chapter I am building and my Black Legion. As far as story lines go, the Praetorians and the Marines will be in charge of the Omicron system. For those interested the link below takes you to the blog for the campaign.

This should provide motivation to get around to fixing up/painting my Black Legion, building the Marines and adding more units to the Praetorians. Also my Kickstarter city table from Secret Weapon Minature turned up, so Ill have to get around to painting that.

Further more I am working on a Marine Chapter for this campaign as well, I'm thinking there name will be the Howling Fists and are a successor chapter to the Iron Hands. I have been slowly painting this squad up, I have two marines left and I'm working on their rhino transport, ill post pictures when they are both completed. 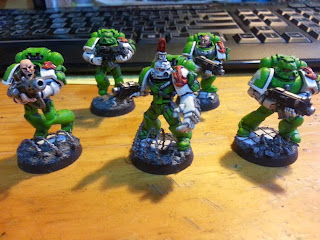 I've been rather busy since my last post with working on my Masters. But now I have some spare time to work on things, I had spped painted most of my remaining tanks to get them at table top standards but need to work on them more to have them actually finished. So work I need done:

Finish off vanquisher, manticore, basilisk, aegis defense line and valkyrie all of these need the final layers of metal done, some minor things like search lights etc and then the addition of transfers.

But seeming how I have reached 2000pts i figure i might work on a project that has sat under my bed since it was released oh so long ago. 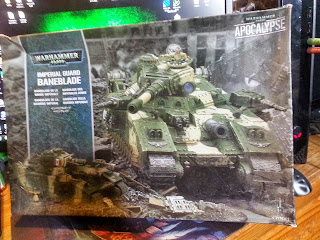 Ok so the tournament i play in every year known as Battle In the Vines is over and I thought id write something up.

Pask in vanquisher with lascannon and camo, partnered up with a leman russ bt with heavy bolters and lascannon 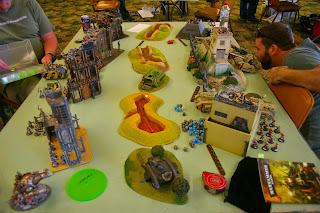 Basically we deployed opposite each other, his list had no chance against mine in the shooting department I proceeded to basically smash him, it was kill points mission and the game ended turn 4 so I walked away with a minor win, probably would have been a major win or wipeout if the game didn’t end early.

Vs iron hand space marines (the game 1 guys son) had two techmarines, 2 10 man units in rhinos, 1 10 man unit on foot, 7 sternguard with librarian in rhino, 5 bikes, 10 scouts, 3 land speeders, 10 devastators and aegis defense line. There was 4 objectives two in our deployments zones, I proceeded to wipe him out, as he came at my line one unit at a time and I managed to claim 3 out of the 4 objectives and ended with a major win.

Vs 0rks had gaz thraka with 4 mega armoured nobs in battle wagon, 2 flyers, 2 20 man ork units, ork zap guns, a looted wagon, big mek with shock attack gun and the shooty orks ah looters? There was 5 objectives in a vanguard deployment. Shouting war chants of revenge for the 24th regiment, Pask proceeded to destroy the battle wagon leaving gaz and buddies pretty much useless and the rest of the army proceeded to mop up big time, I had 4 out of the 5 objectives with one contested giving me a major victory.

Vs tau and goes to show that tau players cant be trusted, he had farsight, a fogeworld special character, 3 riptides 2 sets of 3 crisis sutis and one set of 2 as troops, 2 units of fire warriors and broadsides. 6 objectives that had numbers. He had two objectives and I had 1 ended in a minor loss. This guy rolled each dice individually, rolled ones on his super charging riptides and told me they get their armour saves, but it turns out they dont, I had to call him out on it every time he rolled a one as he said nothing to me when it happened and was content to do nothing about it. Rerolled cocked dice if it missed but kept the ones that hit, in comp he scored 1 out of 5, 2 1’s/5 and 2 3’s/5 ( this as it turns out later cost me)

Vs elder with farseer with dire avengers in a wave serpent, another 2 untis of dires in wave serpents, fire dragons in wave serpents, 2 of the tanks with the big crystal and 2 forgeworld vehicles and warp spiders. I got first turn blew up two vehicles, and strong game which ended with me claiming 10 kp’s to his 5 and giving me a major victory.

So in the end I came second by 0.3 of a point. So if I had given the tau guy a 1 or 2 (Would of been a one if i knew about the supercharge thing)for sports instead of a 3, the glorious 124th would have won.

Hands down Pask, manticore, basilisk and eradicator did great. Orders were very effective, going to ground in cover/behind the aegis and ordering them back up was wonderful and a psyker very helpful. List only needs a slight tweak if I take it next year.
Posted by Extrac32 at 2:53 AM 2 comments:

New additions and return to an old one

Well some reinforcements arrived during the week and now that I am finished with uni for the next 6 weeks and with a tournament looming at the end of June its time to get to work. Also funnily enough the Valkyrie I last posted on, was back in April 2009! So there has been much progress on this bad boy. So plan is to build the new additions and paint all my tanks including finishing of the russ from last post. 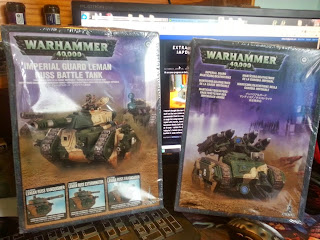 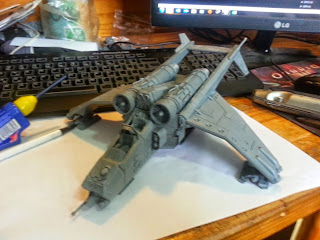 Ok so some progress on the tank thus far: 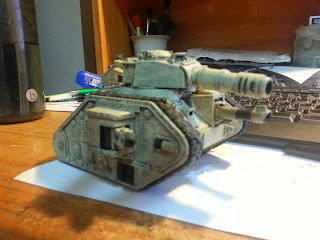 I haven't bought the new book yet but I've been reading a lot of stuff on the new codex and am tempted to team this russ up with commander Pask in a vanquisher tank and thus freeing up a HS slot. A rough list using battle scribe for 2000pts gives me: 1.Command squad with mortar, banner and vox 2. Pask in vanquisher with hull lascannon Battle tank with sponson hb and lascannon 3. 2 platoons of 35 man - various hw and assault weapons 4. veterans squad in Valkyrie 5. leman russ eradicator with hb's all round 6. manticore 7. basilisk 8. aegis defence line with quad gun
Posted by Extrac32 at 7:52 PM 2 comments:

Lost in the warp

Hey folks, Its been a while, I've been rather busy with work and uni (no surprise really). Lost a lot of motivation and desire to work on the Praetorians or any of my other projects. However my group of friends should be starting up a campaign soon and that has motivated me to work on stuff again. Originally the plan was to work on a new project, that being a marine chapter but I have decided to finish my guard. Especially with the new codex and models just around the corner, so expect some actual updates soon. Currently just started painting a leman russ. Thanks, Extrac
Posted by Extrac32 at 9:32 PM 4 comments: